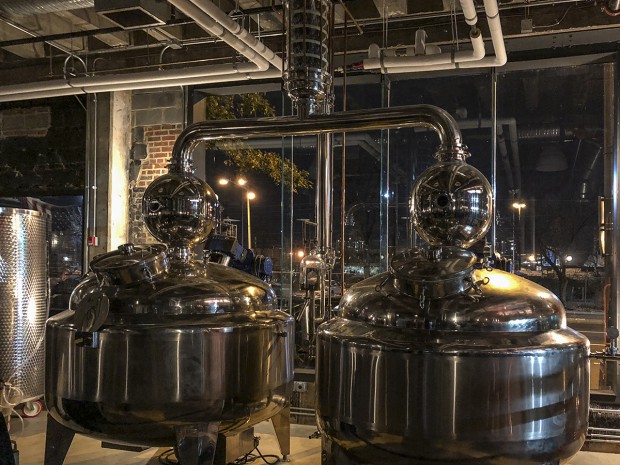 April 30, 2020 – While “stay-at-home” recommendations and many other limits on businesses are ending in many U.S. states over the next several days, the proverbial light at the end of the tunnel has many craft distillers thinking “freight train” instead of sunshine. Weeks of lost sales and production have left many of the nation’s more than 2,000 small-scale distillers in financial distress, according to a new survey released today by the Distilled Spirits Council of the United States and the American Distilling Institute.

The survey of 118 craft distillers found nearly two out of three worried not only about the long-term survival of their businesses, but the short-term survival. 42 percent said they do not believe they will able to stay in business for more than three months, while another 21 percent are worried that they will have to go out of business within the next three to six months. 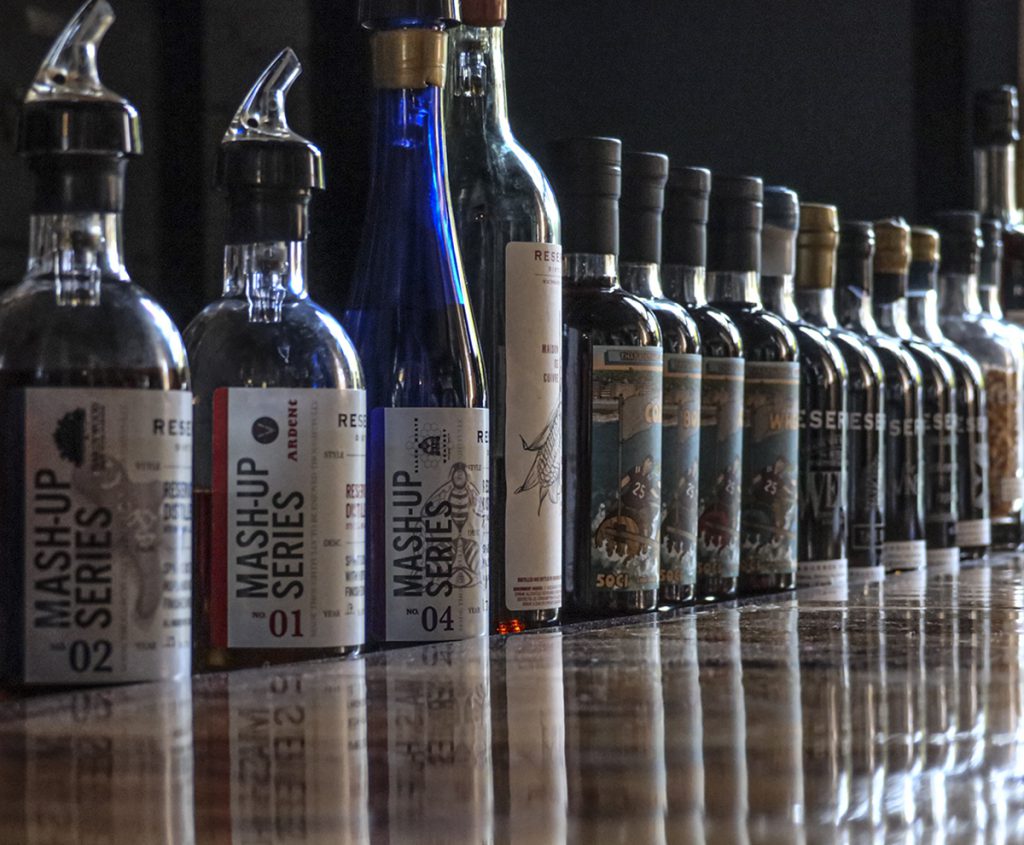 Bottles on the bar at Reservoir Distillery’s tasting room in Richmond, Virginia.

Craft distillers are especially reliant on sales in their on-site tasting rooms and distillery shops, and with many forced to close all public-facing operations because of state or local mandates, the impact on revenues has been significant. The survey found that on average, craft distillers have lost 64 percent of their sales since the coronavirus crisis began. 43 percent of distillery employees have been either laid off permanently or temporarily furloughed, even as more than 750 distilleries have switched operations from distilling spirits to producing alcohol for use in hand sanitizers and disinfectants.

“What’s really sad about it is…just over the last 10, 15 years we’ve seen such a great growth in the craft distilling movement,” Distilled Spirits Council CEO Chris Swonger said in a telephone interview. “We’re going to do our level best to work with Congress and the state governments to make sure that government does its role to help support these great businesses around the country so they can survive and ultimately thrive,” he said.

Distillers have not been expressly included in any of the three coronavirus relief packages approved by Congress so far, except for a provision that exempts them from the federal excise tax on alcohol produced for use in sanitizing products – as long as those products comply with Food & Drug Administration standards requiring the use of denatured alcohol. DISCUS and other industry groups have been trying to persuade the FDA to expand its list of approved denaturing agents because of a nationwide shortage caused by high demand for sanitizing products.

At the top of the industry’s immediate wish list: a deferral of federal excise taxes due on alcohol removed from bonded storage during the current quarterly reporting period. Those payments are due at the end of June, and Swonger says a deferral period would help distillers with critical cash flow issues. The survey found nearly two out of three craft distillers have cancelled orders for grain, barrels, bottles, and other supplies – creating a wider economic impact for both the spirits and agricultural industries.

The wish list also includes legislation to either extend or make permanent the current federal excise tax break distillers receive on the first 100,000 proof gallons of alcohol they remove from bond for sale each year. While both large and small-scale distillers receive the tax break, major distillers reach that threshold within weeks while most small distillers never come close to it during a calendar year. That tax break was extended for a year last December as Congress was preparing to adjourn for the holidays, and is now scheduled to expire at the end of this year. In addition, U.S. industry groups are working with their counterparts in Europe to try and pressure politicians to set aside the trade disputes that have led to punitive tariffs on whiskies, with a resulting loss of export sales on both sides of the Atlantic. 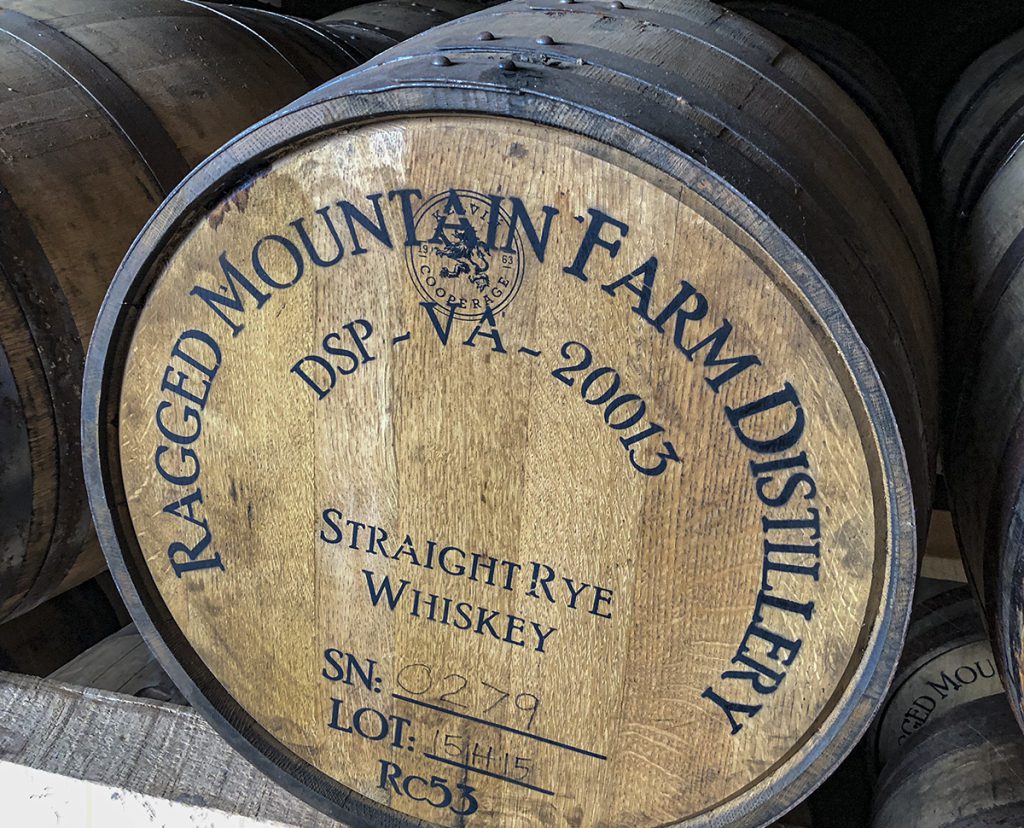 A barrel of Rye whiskey maturing at Ragged Branch Distiller near Charlottesville, Virginia.

Craft distillers have had many of the same problems as other small businesses in getting federal loans through the Small Business Administration’s Paycheck Protection Program. While virtually all craft distillers are privately-held companies and not required to disclose their finances, publicly-traded Portland, Oregon-based Eastside Distilling was able to get a $1.4 million PPP loan during the first phase of funding, according to the company’s required disclosure statements. In addition, Pittsburgh-based Wigle Whiskey confirmed today that it successfully applied for PPP funding in the most recent phase of funding. Wigle lost out on receiving a loan in the first phase of funding after PNC Bank failed to submit the distillery’s application to the SBA for approval, but co-founder Meredith Meyer Grelli told WhiskyCast in an interview that PNC bankers were much more responsive to their needs when the second phase of loan funding became available Monday.

Grelli and her colleagues were forced to close six of their seven tasting rooms and shops when Pennsylvania Governor Tom Wolf shut down most of the state’s “non-essential” businesses last month, but their main distillery shop was one of the few places in Pennsylvania allowed to sell whiskey for nearly a month. She told WhiskyCast Wolf’s decision to close all of Pennsylvania’s state-controlled liquor stores led to a sharp boost in sales during the first month of the lockdown, but those sales have dropped off in the last 10 days as the state started opening its stores gradually for curbside pickups.

“It definitely keeps you on your toes,” Grelli said with a laugh during a telephone interview. “It’s been sort of a good, big challenge every day…I often say that a year in a small business owner’s life is like three years of normal life, and now it feels more like seven years…we are definitely working around the clock trying to be nimble, agile, and pivot as we need to,” she said.

That ability to pivot quickly may be the difference between staying in business or not. Longtime craft distilling veteran Paul Hletko of FEW Spirits in Evanston, Illinois said during WhiskyCast’s live webcast Wednesday that there is a “wave of failed craft distilleries that’s about to hit us like a ton of bricks.” Hletko cited a similar survey earlier this month by the American Craft Spirits Association showing even more pessimism than the DISCUS/ADI survey, with two out of three distillers surveyed projecting they might be out of business by the end of the month.

“Did the debt (loan deal) come through from the federal government…did it not come through, will distributors pay the invoices that they had from before, will they order more whisky? “You’ve got a lot of folks that rely extensively on the on-premise business across the world, and having those numbers go to zero is very tough,” Hletko said.

“There are many people that are going to be fine, but there’s a lot of folks that are just not going to be able to make it cause there’s no more revenue…it’s a very tough world to be living in these days.”