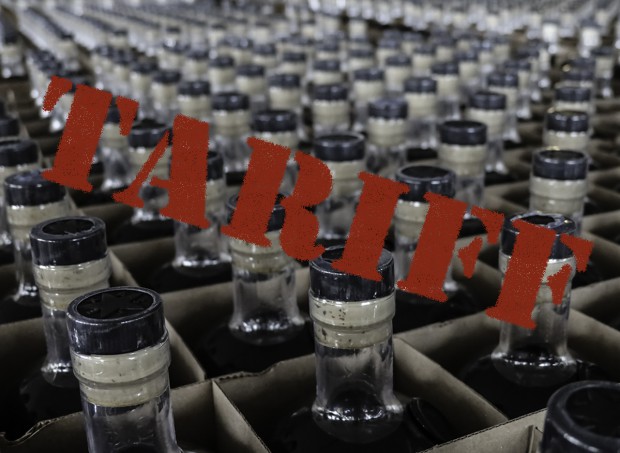 June 18, 2018 – The list of countries scheduled to impose import tariffs on Bourbon and other American-made whiskies has grown again, with China becoming the latest nation to challenge the Trump Administration’s hard-line stance on global trade. Over the weekend, Chinese officials announced plans to retaliate for new US tariffs on Chinese exports of electronics and other products announced Friday by US President Donald Trump. Beginning July 6, China will slap a 25 percent tariff on imports of American whiskies, along with automobiles and a range of agricultural products including beef, pork, and soybeans.

As with similar tariffs on whiskey and other exports previously announced by Canada, Mexico, and the European Union, the list of targets is designed to create political pain for the Trump Administration by hitting products from so-called “red states” led by Republicans. For instance, almost all of the American-made whiskey exported to China comes from Tennessee and Kentucky, the home state of Senate Majority Leader Mitch McConnell.

“I do worry about — and a lot of my members worry about — the impact on, let’s say, Kentucky bourbon, for example, or Kentucky farmers,” McConnell told the Washington Examiner last week. However, McConnell blocked an attempt by Tennessee Senator Bob Corker to restrict the president’s ability to impose tariffs on imports without Congressional approval. “I don’t think it makes sense to try to impair what President Trump’s doing.” McConnell said in an interview for the Examiner’s “Behind Closed Doors” podcast. “The best thing is to continue to engage with the administration, make our arguments, and hope that this doesn’t continue.”

While the whiskey tariffs could begin to take effect as early as Wednesday, when the European Union plans to start phasing in its list of targeted exports, most will not take effect until July 1. Brown-Forman executives confirmed earlier this month that they increased export shipments of Jack Daniel’s and their other whiskies earlier this year to countries likely to be affected by a trade dispute in anticipation of potential tariffs. Like many of the larger American whiskey distillers, Brown-Forman controls much of its global distribution and has warehouses available to stockpile several months worth of whiskey to minimize the impact of a trade dispute.

“We are just innocent little bystanders in a game being played way above our pay grade,” says FEW Spirits founder Paul Hletko. His distillery in Evanston, Illinois exports between 15 and 25 percent of its annual production overseas, and took a major hit two years ago when the UK’s Brexit vote sent the British pound plunging against the US dollar and other world currencies, raising the cost of his and other American-made whiskies significantly.

“FEW exports one-half of one percent of US spirits exports to China, and we expect that to evaporate,” Hletko said during an interview at the New York Independent Spirits Expo. Hletko is a former president of the American Craft Spirits Association, one of the trade groups lobbying Trump Administration leaders to explain the larger impact of the steel and aluminum tariffs. Those groups have been working for years to remove tariffs on distilled spirits, along with other barriers to trade, and the results of that work appears to be evaporating almost as quickly as whiskey evaporates from barrels in a hot Kentucky rickhouse. That evaporation is called the “angel’s share,” but for distillers, the devil is in the details of market access worldwide.

“Any time, and I mean any time, that we have constraints on market access is a big deal for us, and this is just one more instance of inability to move product because of yet another restraint of some sort,” said ACSA executive director Margie Lehrman. Her team has been meeting with members of Congress and their staffs, and has been trying to meet with administration trade officials “to make sure that they understand the overall impact on a burgeoning industry that is reliant on this market access.”

The industry cheered December’s tax reform legislation, which included a two-year cut in the federal excise tax on the first 100,000 proof gallons of spirit distillers produce each year. While distillers large and small benefit from that cut, the biggest impact was projected to be on small-scale distillers, and many had already started reinvesting their savings from the tax cut in expansion projects and hiring new workers. Adam Spiegel of California’s Sonoma County Distilling Company has already started expanding his facility from around 6,000 square feet to 21,000 square feet, with additional room for barrel storage and expand his annual production by up to five times current levels when the expansion is completed this fall.

For Spiegel, the trade war is a double whammy. Not only will his export sales be affected by tariffs in the European Union, where Spiegel exports around 25 percent of his annual production, but the US tariffs on imported steel and aluminum have blown up his construction budget.

“I have a bunch of new stainless steel tanks that are on their way here that I just so happened to purchase apparently at the wrong time, Spiegel said as he rolled his eyes during an interview. He estimates the tariffs could add as much as $60,000 to the cost of his expansion, but admits that he has no clear guidance from his suppliers. “Everybody’s just kind of on hold…they’re saying ‘listen, all of our pricing was good up until a certain point, we’re going to have to see what happens when it lands…we’ll know what tariffs are assessed the day it lands,” he said.

Spiegel’s tanks and other equipment are being fabricated in the US from imported stainless steel. “The welders are here in the States putting together all the bits and pieces for us, so they may have rolled it four or five thousand miles away, but we’re actually hurting American jobs by what they’re doing…as a small business trying to get some traction here, I think it’s really unfortunate,” he said. Spiegel estimates the money he will pay in higher costs for his steel could have covered the cost of hiring one or two new full-time employees.