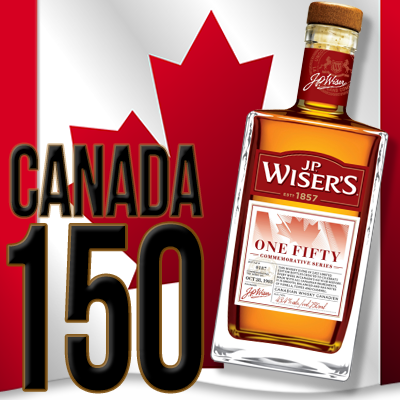 July 1 is Canada Day, and this year it’s even more of a holiday than usual. Canada celebrates its 150th anniversary this Saturday, and Hiram Walker Distillery master blender Don Livermore marked the occasion with a trip from coast to coast – and all the way from near the U.S. border to the Arctic Circle along the way. He led tastings of the new J.P. Wiser’s One Fifty Commemorative Series whisky at each stop, ending in St. John’s, Newfoundland. That’s where we caught up with him for this week’s WhiskyCast In-Depth. We’ll also look at the impact of the Trump Administration’s proposed 2018 federal budget on the whisky industry. That budget cuts funding for the key Treasury Department agency that regulates whisky and spirits distillers, and also eliminates funding for an Agriculture Department program that has helped boost U.S. whiskey exports worldwide.

In the news, the owners of Vermont’s WhistlePig Rye have confirmed reports that they’re considering offers to sell the distillery and its whiskey stocks in what master distiller Dave Pickerell describes as a “feeding frenzy” market for craft distillers. Chivas Brothers workers at the company’s main blending and bottling plant in Scotland have voted to go on strike after rejecting a contract offer, and the threat comes as Scotch Whisky exports during ther first three months of 2017 rose by ten percent over a year ago. We’ll also look at the week’s new whiskies and taste three Canadian whiskies, too!