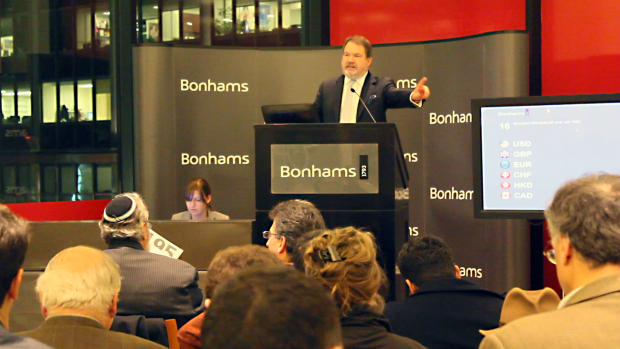 November 12, 2015 – Nearly 18 months after pulling out of the US whisky auction market, Bonhams is returning to one of the world’s largest whisky markets with an auction to be held in New York and San Francisco on November 20. The combined wine and whisky auction will begin with the first 175 lots of rare whiskies and spirits to be auctioned in New York and simulcast at the Bonhams galleries in San Francisco and Los Angeles, then the action will switch to San Francisco for the remaining 575 lots of wine.

“We had a single collection come along from a longtime client of ours, and we discussed briefly with him selling in Edinburgh, and we decided it would be better situated in New York…he’s from the New York area, and he was the impetus for putting the sale together.” While D’Urso would not identify the client, he described the seller as a longtime collector with a special interest in Ardbegs, and the auction will feature his 1965 40-year-old Ardbeg bottled in 2005 along with 15 rare Ardbeg single cask bottlings from 1972, 1974, and 1975. The auction will also include the collector’s rare single malts from the Glenfarclas Family Cask series, The Dalmore Candela and Eos malts, a complete set of the Bowmore Trilogy (Black, Gold, and White) releases from 2007-2009, and a series of rare hand-labeled Macallans along with whiskies from other Bonhams clients.

While no future New York-based whisky auctions are on the schedule for Bonhams, D’Urso says there will likely be more in the future. The original decision to stop doing whisky auctions in New York was based on business reasons, according to a Bonhams spokesperson last year. D’Urso described the November 20 auction as an experiment to see what format might work best for the market.