A Peated Glenrothes? Amazing, But True! 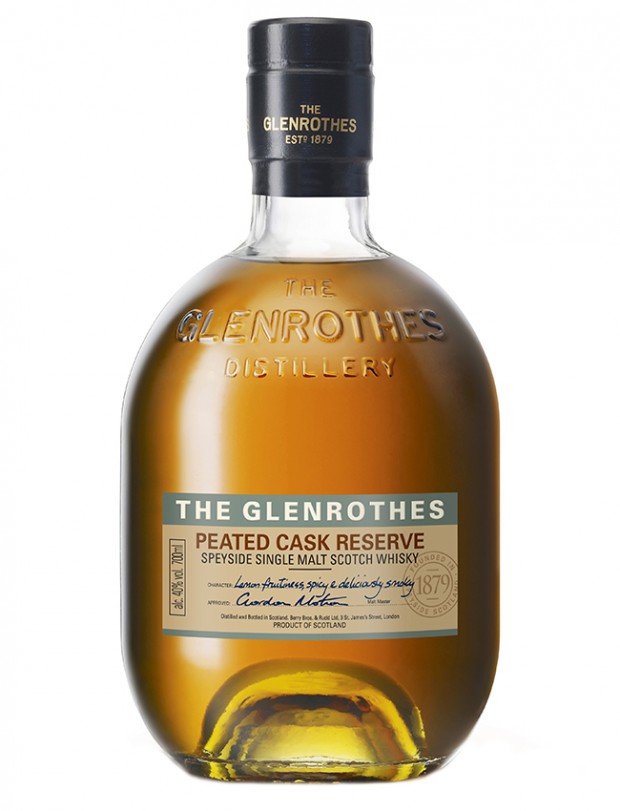 November 2, 2015 – Single malts from The Glenrothes released over the last two decades have been known for their sherries character, since the distillery has traditionally focused on maturing its malts in ex-Sherry casks. Now, Berry Bros. & Rudd has taken the expansion of The Glenrothes to a new — or perhaps — old level with the latest release in its Reserve Collection Series: The Glenrothes Peated Cask Reserve. The release follows the rebranding of the Alba Reserve as the Bourbon Cask Reserve and this year’s introduction of the Vintage Reserve and Sherry Cask Reserve, which replaces the Robur Reserve in the distillery’s range. Peat? The Glenrothes? Not entirely out of character, as the brand’s longtime steward Ronnie Cox explained in a telephone interview. In the years before World War II, most Scotch Whisky distilleries were still using peat as a fuel source in their malting kilns, and The Glenrothes was no exception, though it used much less peat that other distilleries. “We thought this would be an interesting departure from the main theme, and we then experimented with it over a period of time by using ex-Islay casks which had already had whisky in them,” he said. The Peated Cask Reserve uses 1992-vintage whisky finished in those ex-Islay casks, and also represents one of the first-ever cask finishes for The Glenrothes.

The release also has historical significance, as the distillery’s owners back in 1887 joined forces with the owners of Islay’s Bunnahabhain Distillery to form Highland Distillers. Over the years, that company grew with the acquisition of additional distilleries and was the forerunner of today’s Edrington Group, which still owns the Speyside distillery and was a partner with Berry Bros. & Rudd in the Glenrothes single malt brand until 2010. At that point, the two partners engineered a swap that gave Edrington the Cutty Sark blended Scotch brand, while Berry Bros. & Rudd received full ownership of The Glenrothes single malt brand and a long-term supply contract for whisky from the distillery.

As for comparisons between the Peated Cask Reserve and those pre-war peated malts from The Glenrothes, the closest comparison Cox can make is with a 1945 vintage distilled immediately after distilleries were allowed to reopen following the end of World War II. “It has got a faint glimpse of peat,” Cox said of the 1945 whisky. “The integration of the peat, or smoke rather, in both (of) these is pretty much similar in terms of the phenolic content…in terms of the actual peat influence and the type of peat that’s being used, obviously the Islay peat is very different than the peat we would have used in Scotland, which is much more sort of aromatic-style.”

While the initial release of The Glenrothes Peated Cask Reserve will be exclusive to Marks & Spencer stores in the UK with a recommended retail price of £45 ($69.50 USD), Cox says early reviews from pre-release tastings have been so positive that additional batches are already being laid down for future releases with plans to make them available in export markets. “There are other places and markets that are smoke-loving single malt markets that we hope to be able to get into as well.”

Will The Glenrothes ever produce its own peated whisky? At the moment, there are no plans to do so, but Cox won’t rule it out in the future.

Editor’s note: This story was updated to include details on the Bourbon Cask Reserve, Sherry Cask Reserve, and Vintage Reserve whiskies in The Glenrothes Reserve Collection.