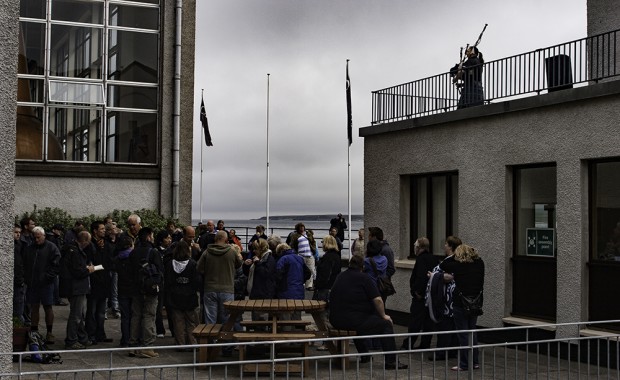 Updated January 28, 2020 – With Scotland in the middle of another lockdown because of increases in Covid-19 cases, one of the country’s largest annual whisky events has been cancelled for the second year because of the pandemic. Organizers of the Islay Festival of Malt & Music (“Fèis Ile) have announced that this year’s event scheduled for May 28-June 5 will not take place, following discussions with the island’s distilleries and community leaders. Non-essential travel between Islay and the Scottish mainland remains heavily restricted, and with many festival attendees used to making travel plans well in advance, the organizers decided to make their decision early.

“Pretty much everything that we do at the Fèis is based around people gathering together, whether it be for a ceilidh, whether it be in a courtyard at Bruichladdich or at Lagavulin, there’s a lot of interaction between everybody drinking…all for the love of the whisky, but we knew that already that interaction and all of those people together wasn’t going to be able to happen,” Fèis Committee spokesman Ben Shakespeare said in an interview for this week’s episode of the WhiskyCast podcast. In addition, there is no government guidance on when travel restrictions might be eased. “There’s lots of talk at the moment about us not being able to travel internationally, certainly people from Australia  already wouldn’t be able to come over, and we had to make a decision about what was best for everybody’s plans as well,” he said.

Fèis Ile traditionally is one of the island’s busiest weeks of the year, with thousands of visitors swelling Islay’s population to nearly four times the normal level of around 3,000 full-time residents. The island has a very limited health care system with no intensive care units, and has been able to avoid an island-wide Covid-19 outbreak so far by limiting travel between the island and the mainland. According to Shakespeare, that was the final deciding factor in the decision to cancel the Fèis. “We have a wonderful NHS, we have wonderful health care here, it’s absolutely perfect, but it can’t cope with four times the amount of people coming perhaps still with an ongoing pandemic,” he said.

“It’s a party for the week, it’s celebrating the amazing culture, the music, and the whisky of Islay, and there’s people that come from all over the world to experience that, and it’s a fantastic thing,” Bruichladdich head distiller Adam Hannett said on a Burns Night Zoom call with whisky writers. “Obviously, there are very good reasons we won’t be doing that this year, we didn’t do it last year, and it just gives us an actual opportunity to try new things and release the special bottlings in a different way…we can connect with more people who can’t make it to the distillery,” he said.

The Fèis Committee and the island’s distilleries are now working on a lineup of virtual events to be held during the traditional Fèis week, and the  distilleries are expected to announce their plans for off-island sales of festival bottlings later this spring. Those holding tickets rolled over to 2021 from the cancelled 2020 festival will be contacted about refunds or using the tickets in 2022.

While the news will certainly be a disappointment to many whisky lovers, the Fèis Committee has already confirmed plans for the 2022 Islay Festival to be held from May 28-June 4.

“Please just keep Islay in your hearts for a little longer: hold on to the love of the island, the music, the whisky and the company, and the embraces when we see you again will be all the sweeter,” the committee said in its Facebook post announcing the decision.

Editor’s note: This story was updated with additional comments and information.